The Reciprocity Factor for Film Photography

Recently I was shooting my Hasselblad 500 C/M with Fuji Velvia 50 slide film which I really like due to its color tonality. I found myself in a situation where I had to take long exposure shots with this kind of film - anticipating that this could be the case before heading out to shoot, I looked up online how much time needed to be added to the measured external light meter reading to compensate for lower light sensitivity of film with exposures often above 2 to 4 seconds. This factor is specific for every kind of film, and is named "reciprocity" failure or factor.

This factor is not needed in digital photography since a digital sensor receives and reacts to light in a linear way from dark to bright. This means that even long exposures are measured correctly by an external or internal camera-based light meter for digital photography. Since the majority of photographers is shooting digital, most have never come across the term "reciprocity" factor. It plays a huge role when taking photos with film - light is not received in a linear way like in digital. Film is less sensitive at both ends of the dark/bright histogram ends - it can be shown as a double-S-curve with turning point in the center. You might know that you can overexpose film quite a bit - it depends on the film, but 3-4 stops can be handled by most negative films quite well for overexposure without losing detail (this is different with slide film which can only handle a maximum of one stop overexposure before blowing out highlights - similar to digital where beginners often overexposure highlights instead of pushing shadows in PP). The same goes for dark areas with longer exposures needed - you actually need to increase exposure to avoid getting pitch dark shadows without detail using film. This is valid both for negative and positive (slide) films! Only that the amount how much more light is needed depends on a) the film, and b) the situation/scenery.

Best is to explain this with examples. As I mentioned in the beginning, Fuji Velvia slide film is not a beginner's film to be used since it does not allow a wide margin for wrong exposure - both at dark and in the bright. Rule of thumb is to avoid overexposure at all cost and rather underexpose this film half or one stop to avoid clipping highlights when present. The film is great to use during regular daylight in colorful scenes - what I like a lot is that it does not require any PP with color saturation after digitization/scanning. Kodak Ektar 100 negative film is also giving great colors but always annoyed me with its tendency to show shadows in blue/magenta cast. Fuji slide film fully avoids this issue and looks very natural in darker areas instead.

I have never tested Fuji Velvia 50 for low light photography - I only found few examples of night shooting with this film online. This time I gave it a try - it was sort of a gamble since I only had three frames of my 120 film left to hit it. I wanted to cover the sunset and the night scene of NYC from Liberty State Park across the river. How did I get to the results shown below? 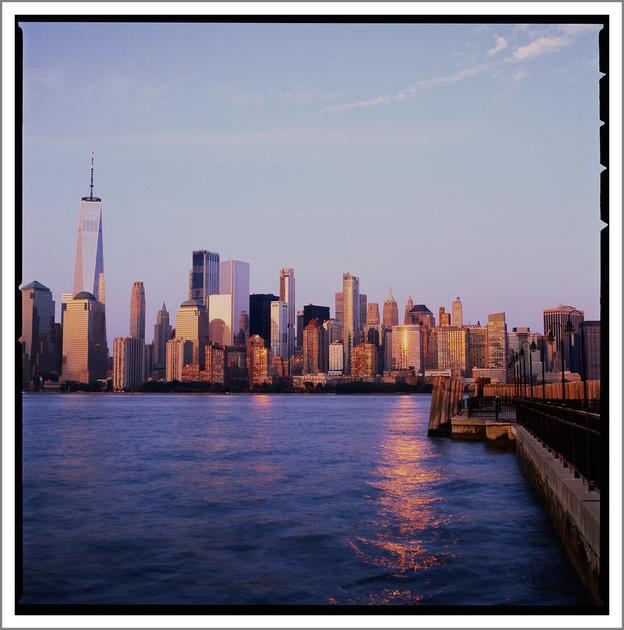 The sun was setting soon after, and quickly the light intensity dropped. I was still at f/11 but now without ND filter since there was no more need to extend the exposure time with less available light. My external light meter showed for ISO 50 an EV-value of 6 which corresponds to 2 seconds at f/11. Now I am hitting the range where the reciprocity factor comes in play - using the scale shown above, I would need to apply 2+1 = 3 seconds instead of the measured 2 seconds. But the situation/scenery also comes in play - I wanted to have the scenery darker to bring out the blue/magenta sky better. I estimated that 2 seconds should be sufficient and ignored the additional second. The result turned out exactly as I anticipated just with more saturation than expected: 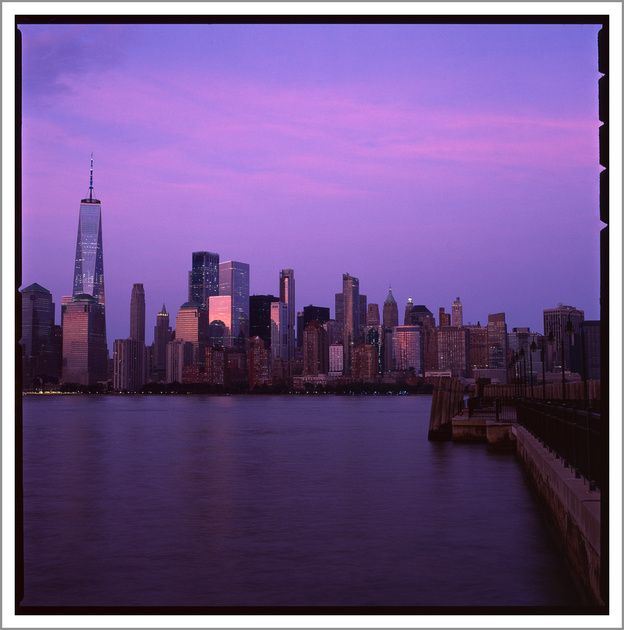 The light quickly vanished after the sun disappeared, and the city became alive with artificial light. Now my light meter showed me an EV value of 2 which corresponds to 30 seconds at f/11 and ISO 50 film. Using the required reciprocity factor of 2x, I would need 60 seconds to accommodate for the lower film sensitivity. But I wanted to avoid overexposure at all cost for my frame #12 - the last frame I had. I simply estimated that 45 seconds instead should bring me in the right range (taking the average of 30 seconds from my meter and 60 seconds with applied reciprocity factor). I released the shutter with my cable release and held the leaf shutter open in bulb mode for roughly 45 seconds (I counted in my head). The result was again very pleasing - showing all detail but avoiding underexposure: 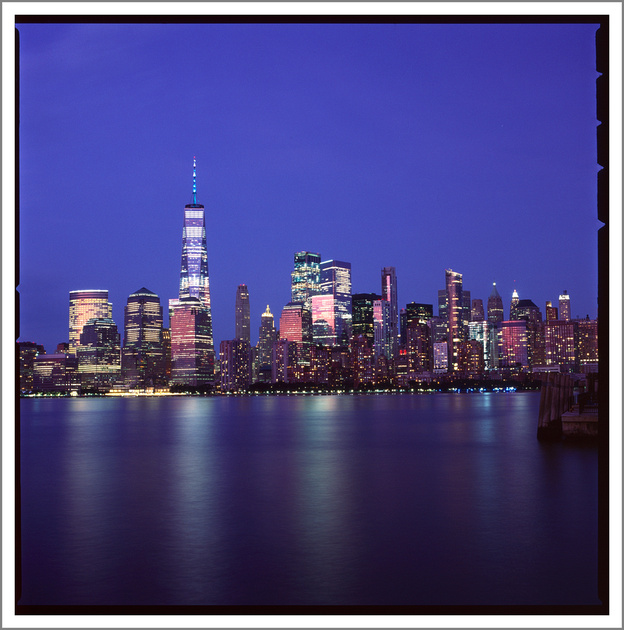 I might actually use this slide film more often for dim/dark light photography after this first experience with it in low light. I really love the bluish cast in the water and the sky which digital would not have brought out in the same way.