After using Leica LTM and M cameras for five years, I decided to add a digital Leica M camera. Main reason for me was to use my good LTM and M lenses on a suitable digital camera without adapter - I managed it well to use my rangefinder lenses with my Sony A7R camera for many years, but especially ultra-wide rangefinder lenses caused some color fringing and blurred corners of the full-frame sensor due to the thicker sensor stack used in the A7R. Problem with Leica M cameras is of course the price - I am writing this blog shortly after the latest flagship model - the Leica M 10-R - was released for over $8K new. But even when looking for used Leica M 10 cameras, the price tag was still around $4.5-5.5K. As I learned from buying Leica M mount lenses used, patience is key to wait for a suitable offer. One day I found a Leica M-E 240 offered on a local online sales platform for a good price. The M 240 sensor has a bit lower dynamic range (DR) than its M 10 successor and the high ISO is limited to ISO 6400 but the 24 MP resolution is the same as in the M 10. Not a biggie for me since I know that I am rarely needing high ISO in my style of photography and can live with a bit less DR. I met with the seller and it turned out that the description of the camera stood up to its promise: it was a nearly brand new M-E 240 originally purchased in summer 2019 with only about 800 photo frames taken. No scratch or any kind of mark on the camera either, also the sensor appeared perfect. I bought the camera and so far have no regret of doing this purchase. Later I found out that the M-E 240 was only produced for a short period of time in 2019 - only 750 cameras were made. I believe I got a great deal regarding price/quality ratio - impossible to get with any kind of M10 camera models for a while to come. The only compromise I had to make was in regard to sensor resolution - I was originally hoping to keep a resolution similar to my Sony A7R with 36 MP full-frame, so 24 MP was pulling me back to my Canon 5D MkII shooting days I thought. But meanwhile I am glad that I made the purchase since the M 240 sensor has benefits over the older generation of Canon 5D MkII sensor from 2009 (for example the M 240 has much better DR!). I summarize my pros and cons seen in the M-E 240 in bullet points below: 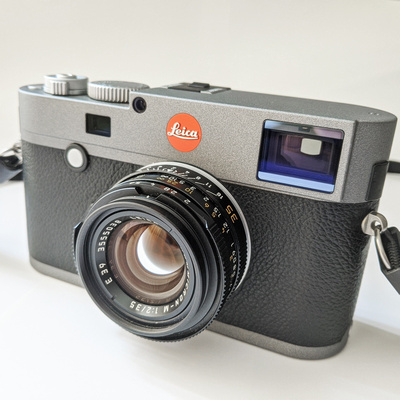 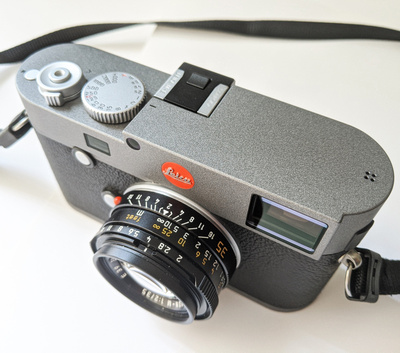 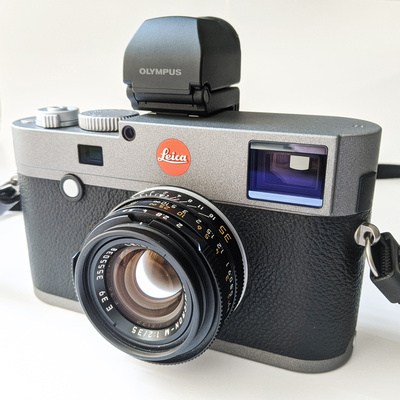 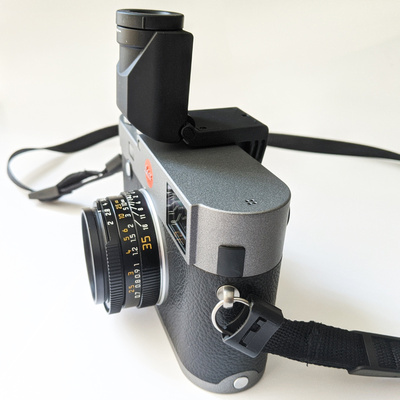 Photo above: Leica M-E 240 with optional VF-2 EVF. It can be flipped into vertical position. Olympus VF-2 and Leica Viscoflex EVF2 are exactly the same model and only different in price.

Overall I am very happy with this camera purchase. Leica is and remains an expensive brand, but getting a used (and nearly mint) camera for a good deal limits value depreciation significantly and allows me to actually use the camera in the wild without being afraid to carry a big jewel around my neck or shoulder. The M 240 was its first and last hybrid camera series made by Leica combining rangefinder, LiveView/EVF capability, and video. The M-E "entry" version has the same capabilities as any other professional M 240 series mostly just compromising in electronic handgrip accessory functionality. Leica currently doesn't make entry-level cameras or Summarit-lenses anymore, they also removed video capability from the M camera series fully. I believe therefore the M 240 series is and will remain in demand for many who accept the camera's lower ISO limitation compared to expensive current M systems. I will use the M-E 240 for years to come in combination with my Leica LTM and M film cameras. The M-E 240 won't replace my track-proven Sony A7R camera either - both will be used in different shooting situations.